My latest pièce de résistance against the new administration has been work with NDAPL (No Dakota Access Pipeline) on a petition drive.  The Standing Rock Sioux tribal leaders are continuing their struggle against the construction of the DAPL, especially since the Trump administration has ordered that the pipeline construction be continued.  However, the vast plethora of attacks made by the administration upon our civil liberties, upon the free press, and upon constitutional norms of government, have diverted much of what little national attention had managed to trickle over to Standing Rock.

Senator Elizabeth Warren of Massachusetts has posted a bill (S. 65, and HR 371), “To address financial conflicts of interest of the President and Vice President.”  In concert with this bill, Roxanne Saxton of Michigan put up a petition through MoveOn.org, calling on Congress to “Require President Trump to provide the audit trail of papers proving he is no longer involved in any way, shape, or form with the Dakota Access Pipeline.”

Michigan has 16 members of Congress (MoC’s, as they are increasingly being called, as groups like Indivisible and others make resistance plans around contacting these key elected leaders).  Our Great Lakes State has 14 US Representatives (5 Democrats, and 9 Republicans); and both of our US Senators (Debbie Stabenow and Gary Peters) are Democrats.  Recent events have put Republican MoC’s under considerable pressure to face their increasingly disgruntled consituents; and many have gone “missing,” ignoring invitations and pleas to hold town halls or public events at which they might have to explain their acquiescence to increasingly unpopular Trump administration initiatives.

This past week, (Sunday, February 19 through Sunday, February 26) was a scheduled recess for both houses, and MoC’s from both parties came home to hold public events or to visit key places in their states and districts.  Our petition campaign’s national leadership sought to exploit the opportunity, and to put copies of the petition, with constituents’ signatures and comments from the online petition, directly in the hands of all of the country’s MoC’s or their respective staffs by the end of the recess week.

Considering that 6 of Michigan’s 7 Democratic MoC’s are co-sponsors of the Warren bill, the Democrats were very friendly to this petition; while the Republicans are less comfortable with the implications of calling on investigations of their party’s president and vice-president.  Democratic officials have not been as eager to avoid public appearances during the recess as have the Republicans; and here in Michigan we were able to make direct contact with several Democratic MoC’s, such as Rep’s Sander Levin (MI09-D) and Brenda Lawrence (MI14-D), both of whom thanked our volunteers for our efforts and asked us to keep fighting.  While Republican staffers receiving the petition for their bosses have not generally been unfriendly in Michigan (and some have contacted our campaign with further questions and requesting electronic copies to back up their paper copies received in person), we were unable to make direct contact with any of the Republican Representatives of our state. 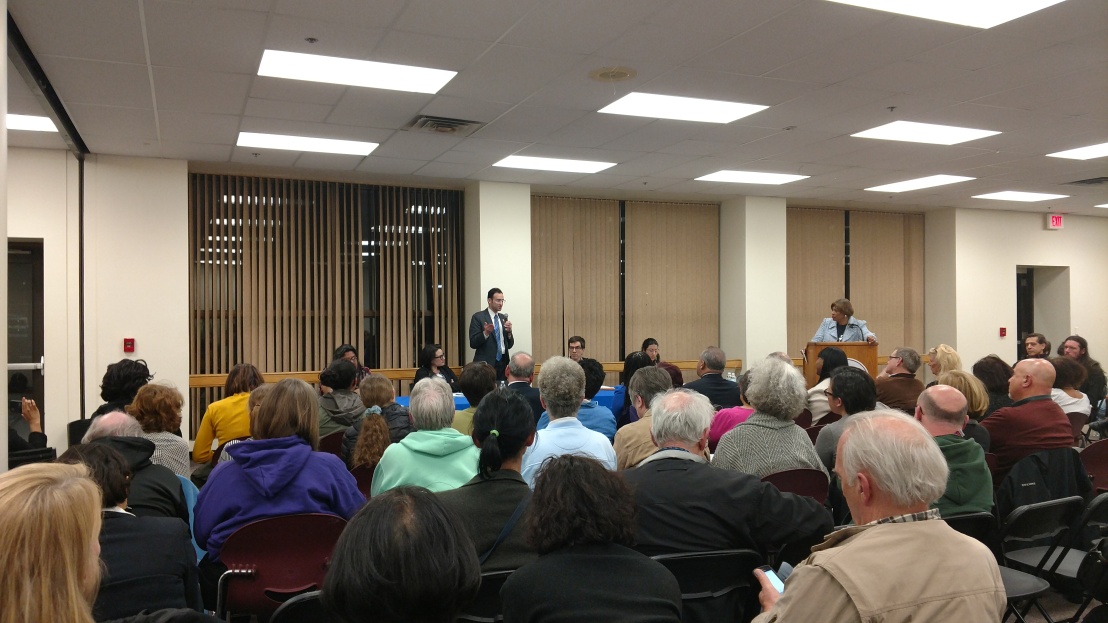 A supportive crowd at Brenda Lawrence’s Town Hall at her Detroit office, 2/24/17, listens to a panel member discussing immigration law.  Rep. Lawrence is at the podium on the right. Photo ©Sparkpolitical, 2017.

Public rallies and town halls by Levin and Lawrence (some attended by other members of the Michigan Democratic delegation, such as Rep. John Conyers (MI13-D), Dean of the House of Representatives, who attended the Lawrence town hall) were scenes of public gratitude to their Democratic officials, in open contrast to the many angry crowds haunting the Republicans around the state and the nation.  At the Lawrence town hall, which I attended, for example, only one member of the audience showed visible (and relatively well-behaved) opposition as a Trump supporter; while applause was loud and energetic from the rest of the room for Lawrence’s support for immigrants fearing the new sweeps and deportation drives of ICE and the CBP, and for her presence at Detroit Metro Airport last month during the protest of the travel ban on Muslims.

On the other hand, Michigan Republicans like David Trott have become notorious for avoiding their own constituents.  While we were (optimistically) hoping to be able to catch at least one or two of them at their offices or during some public event or other, these officials have continued to avoid the public.  However, the Jackson office of Rep. Tim Walberg (MI07-R), whose constituents have created a “Where’s Walberg?” site for their missing representative, contacted our campaign and informed us that his office was going to address the questions raised in the comments column of the signatures print-out.  Other questions were asked of our volunteers by Republican staffers seeking more information about the petition, so they were not all immediately dismissive or unfriendly.

Now that Michigan’s petition effort is virtually complete (current projections are that all packets will have been delivered by Monday, Feb. 27), the Michigan volunteers are ready to move on to our next battle of resistance, either against the state administration of Governor Snyder, or against the national administration of President Trump.

Headline image, Danee Kaplan delivering our petition to Mitzi, Kalamazoo office staffer for Rep. Fred Upton (MI06-R).  With special thanks to Danee Kaplan for authorizing use of this photo.