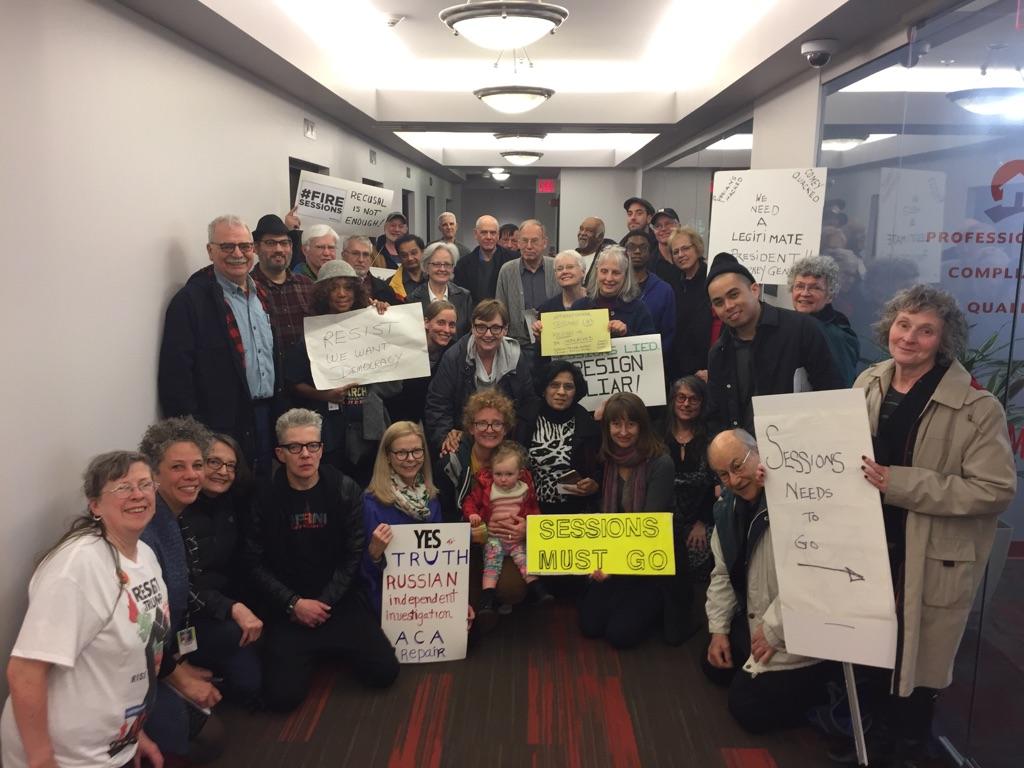 While the Trump administration works to divide our nation and to deepen the hatreds and inequalities that further such division, organizations like MoveOn.org are working assiduously to keep that agenda from succeeding.  MoveOn’s program includes the participation in national “Resistance Tuesdays” (also pursued by other organizations as well).  For the many outraged Americans who can only do so much, the idea is to focus the energies of as many resistance members as possible on Tuesdays, a weekday that allows us to visit elected leaders’ offices and to hold public events that can enjoy a brief moment in the spotlight.

This week, I participated in three actions for Resistance Tuesday.  First, I joined a group of MoveOn and Indivisible members, and visited the Detroit Regional Office of Michigan’s Senator Debbie Stabenow.  Terry Campbell, the senator’s regional manager, had a friendly meeting with the roughly 40 or so of us.  We brought with us a flyer of issues to present, calling on the Senator’s help in resisting Trump.  Senator Stabenow has already been at the spearhead of the resistance by Democratic members of the US Congress, so there was no acrimony like that found between many Republican members of Congress and their constituents. 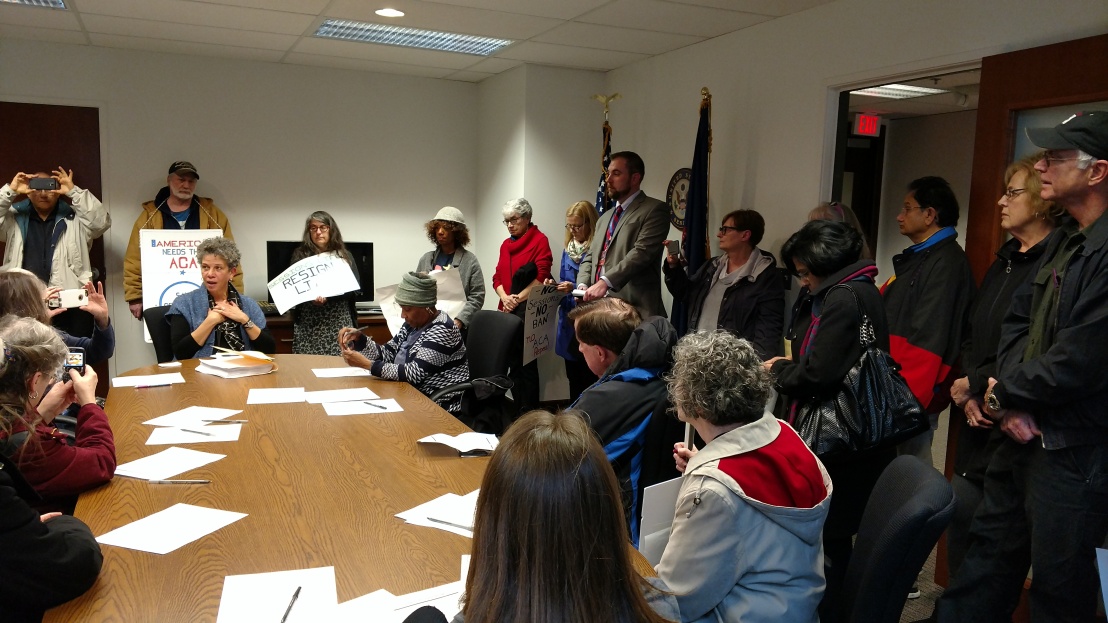 Terry Campbell (on the left, at the head of the table), Sen. Stabenow’s regional manager, discusses our issues with MoveOn and Indivisible members in the senator’s Detroit office.

Then, I went to Ypsilanti, MI to participate in a Planned Parenthood/ACA support rally at a district office of US Representative Debbie Dingell (MI12-D).  We rallied on the street outside of the office building for about half an hour, while cars driving past us honked their horns in support of our rally.  Dingell’s district office staff invited us up to the office for cookies and lemonade, and to discuss our issues with them.  As with Senator Stabenow, Rep. Dingell has been a key player in supporting the Affordable Care Act and resisting the Republican agenda of repealing it; and she has also been a leading voice on the Hill for defending Planned Parenthood from attacks by conservatives.  Our meeting with the staff was therefore similarly friendly. 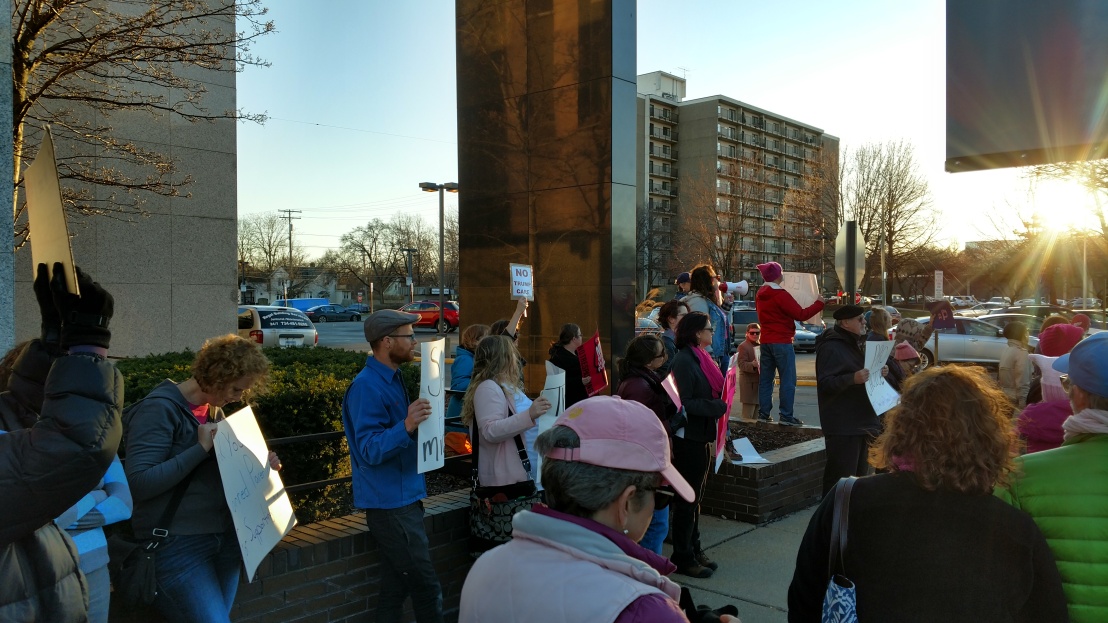 Both Stabenow’s and Dingell’s staffs made it abundantly clear that Republicans are not shy about contacting them about concerns and pleas to vote on their side; and that our voices were therefore a vital part of the growing resistance, and a necessary part of the process of pushing Congress away from the extremism of the White House’s agenda.  We were thanked for our activism, and urged to make Resistance Tuesdays a regular moment for contact and action.  The staff members also told us that for our voices have been far more numerous than are the voices of those supporting the regime of hatred and division.  Terry Campbell of Stabenow’s staff said that some 10 resistance calls come in for each call urging support of Trump nominees and initiatives. 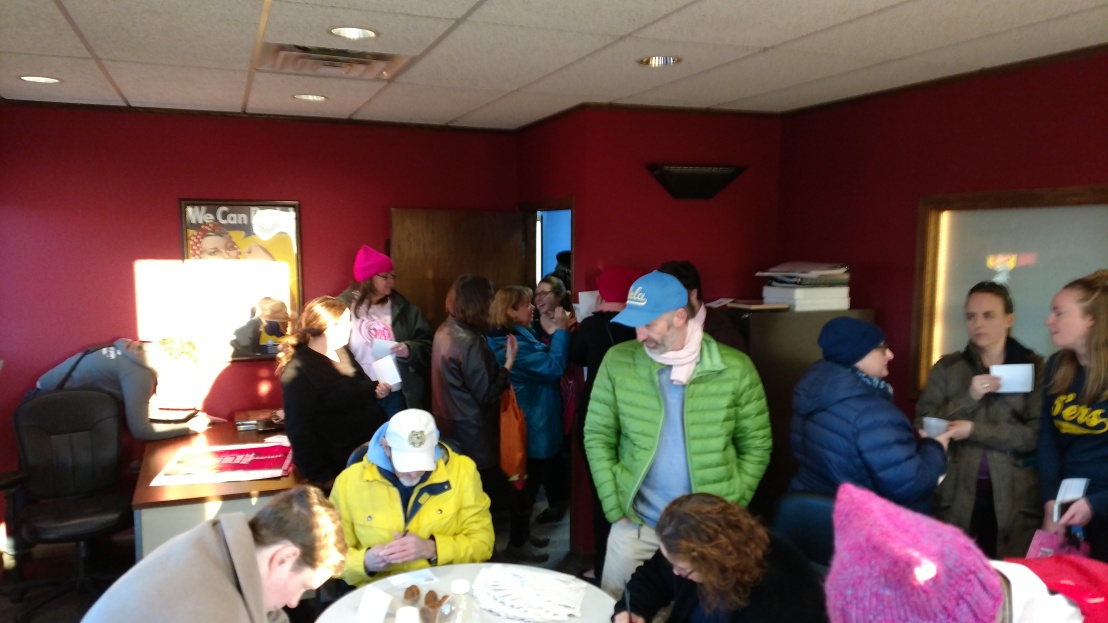 Finally, I drove to Dearborn, MI, where I had worked for the Clinton campaign during last year’s campaign season.  At the Arab American National Museum, speakers from Voters Not Politicians and Count MI Vote held a town hall on redistricting.  The groups are working on fielding a ballot proposal in Michigan to create an independent, nonpartisan redistricting commission to eliminate the state’s outrageously gerrymandered districts.  In the 2016 election, for example, Republicans accounted for 47.6% of the vote, while Democrats accounted for 47.3%; a minuscule advantage showing the state’s roughly even partisan split.  However, 9 of the 14 Representatives elected to Washington were Republicans, versus 5 Democrats.  In the state house in Lansing, a closer split (63 Republicans to 47 Democrats) still shows a much stronger partisan division than is apparent in the actual, counted votes of the state’s citizens.  Both Republicans and Democrats in Lansing have taken advantage of gerrymandering in the past to minimize the votes of the weaker party in the state house, and have redrawn districts to silence opposition and to create primary challenges to strong candidates from the weaker party. 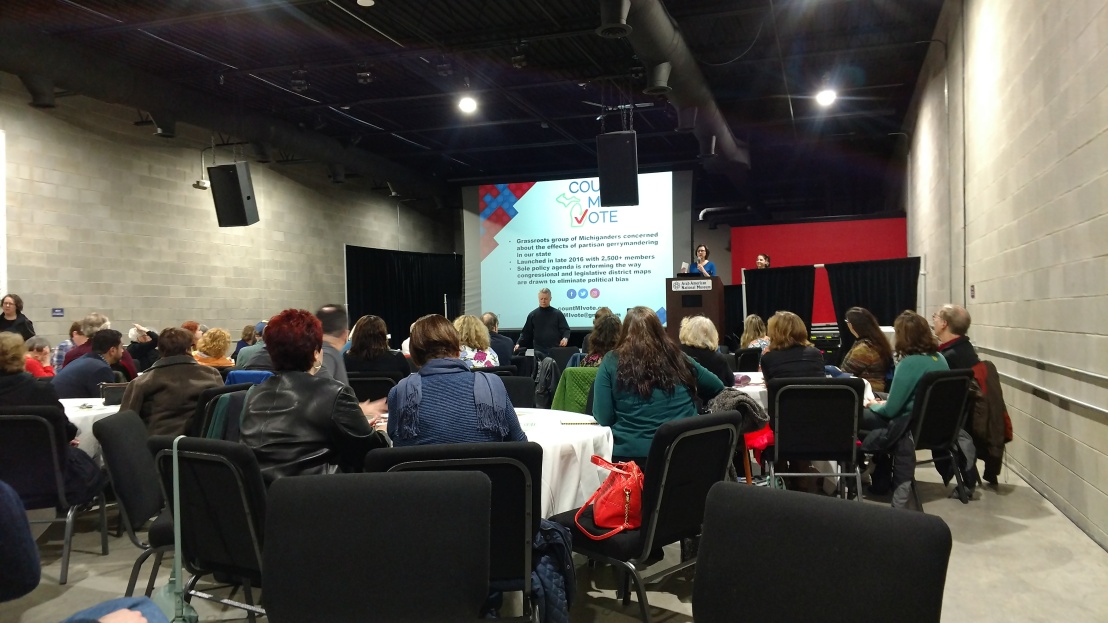 Michigan citizens attend a town hall with Voters Not Politicians and Count MI Vote in Dearborn.

The two groups holding the town hall argue that voters from neither party can be truly represented as long as gerrymandering continues.  While voters for the weaker party will never get either their candidates nor their issues onto the central stage, voters for the stronger party will also get pushed over in favor of special interests as that party’s candidates will always be confident of re-election.  Candidates and elected officials in states with gerrymandering are universally more responsive to campaign contributions from large, corporate donors; and take only a token interest in hearing even their own party supporters on issues and positions.  Corporate donors have long been opposed to state propositions to eliminate gerrymandering, because they understand clearly that while gerrymandering does not itself cause corporate corruption of politics, it is an environment that openly enables such corruption to flower.  The groups were recruiting volunteers and donors for the upcoming year’s campaign to put their initiative onto the ballot in Michigan.

The day’s activism demonstrates several strengths about the resistance.  First, the three completely different groups of voters participating in three different events (I was the only one in the crowd who attended more than one of these three events), shows us that, with local groups rising all over the state and the nation, resistance support is much stronger than what might be thought by looking at the numbers of any one, single event.  The state of Michigan held far more events this Tuesday than just the three that I attended; and each event had a diverse group of local and regional supporters come to be heard and to learn about how to express their collective voice.  The resistance is strong, is diverse, is everywhere, and is growing.

The second lesson is that, thanks perhaps to groups like Women’s March on Washington, and to Planned Parenthood, women are specifically taking an increasingly dominant role in organizing, leading, and attending these events.  While the agenda of the Trump administration affects all people in the United States, women are specifically impacted even more by so many of the different aspects of Republican plans to infringe on our rights.  From steps to keep refugees out of our country (a group that is predominantly women and mothers with children), to the deportation sweeps and detention actions against immigrants (mothers are being separated from their children and families, particularly the children born here being separated from their mothers who are being detained), to more visibly anti-woman programs like the campaign against Planned Parenthood (whose provision of health care to the poor would be even more necessary if the Republicans succeed in repealing the ACA) and against reproductive rights, women have found that this regime has them directly in their cross-hairs.  Women activists are coming out fighting, pushing their issues onto the central stage, taking seminars on running for office, and constructing a community of non-violent, caring resistance members and actions.  This community is strong, is diverse, is everywhere, and is growing.

Finally, individual voices of constituents are consistently held by elected officials to be a strong factor when they can be heard in groups.  A single voter acting alone can have their issues recorded for their member of Congress if they bother to call, and those issues are tallied so that members of Congress do see what issues are important to the constituents who call or write or visit.  However, groups showing up en masse can put an agenda directly in the face of elected officials, who have little choice but to respond and to try to show their responsiveness on those issues.  Conservative citizens’ groups were created by and shaped the Tea Party during the last eight years of Republican obstruction of the Obama administration; and the new progressive resistance is coming out in numbers that are simply unprecedented, and make the Tea Party pale by comparison.  These groups are strong, are diverse, are everywhere, and are growing.

What can you do?  Get on Facebook, or Twitter, and find a local Women’s March, Indivisible, or other group.  Or go to MoveOn.org, or Planned Parenthood, or to any other citizens’ groups working for the resistance.  Check out The Resistance Calendar for events in your area (or national events that you can travel to if you are able).  And keep calling, emailing, and visiting your members of Congress, putting your issues onto their agenda.  Actions like these are why the resistance is strong, is diverse, is everywhere, and is growing.

Headline image (Senator Stabenow’s Regional Manager in Detroit, Terry Campbell, sits in the front row, second from the left), shared with the author by an unknown MoveOn volunteer, taken on her cell phone, and used with her permission.   All other photographs ©2017, Sparkpolitical.