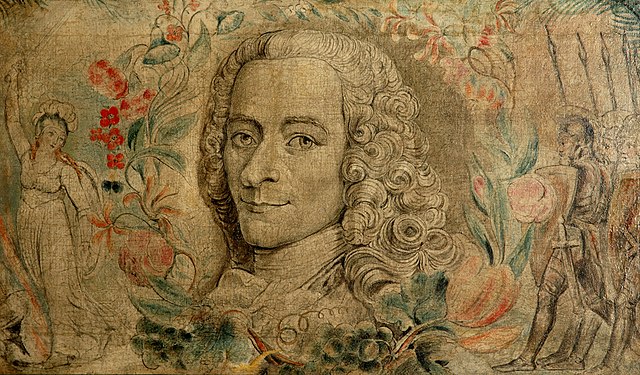 Quote of the Week:  It is difficult to free fools from the chains they revere. –Voltaire

The problem with short, pithy one-liners is that they do not delve deep enough to spotlight the complexity that underscores a seemingly simple reality.  Voltaire’s oft-quoted contribution can be (and is) used by holders of any political viewpoint to attack all others, decrying each other as “fools” revering their “chains.”  A Nazi could have used the line against a Communist or democrat; a Communist would eagerly see a connection between the “chains” and Marx’s exhortation to workers to break their chains.  American Democrats can use this line against Republicans, and Republicans against Democrats.  Clinton supporters could use the line against Sanders supporters, and vice versa.

The truth, however, is that it is not adherents of any single ideology who “revere” their chains.  Instead, fools end up on all sides of political questions; each with a different set of chains that they revere, each convinced that the rest are the fools.  The trick to not being a fool is to notice the chains around you; and to push yourself, your politics, your community, and your candidate to help you to free yourself from your own chains.

We find fools revering their chains behind all sides of the 2016 American presidential election.  Those advocating for Senator Bernie Sanders are fools for failing to see in their enthusiasm that Sanders is neither an ideal candidate who could beat an energized Republican attack on his socialist beliefs, nor is he the perfect Leftist.  Like that of his chief rival, Secretary Hillary Clinton, Sanders’s legislative record is liberal, but shows a willingness at times to compromise with conservatives.  There is not quite the universe of sunlight between the two Democratic finalists that Sanders supporters believe there to be.

Furthermore, by threatening to break up the liberal polity, or to take their votes to third parties or waste them away on writing in Sanders, they do not have the numbers to get what they want but they do have the numbers to keep the Democrats from defending the powers of the presidency from the Republicans.  Despite their attacks on establishment Democrats, Democrats have consistently pushed and continue to push a liberal agenda forward, eking out a moderate construction of our City on a Hill despite the conservatives’ attacks on the City.  A failure of Sanders supporters to unite behind the Democratic flag will hurt their own interests and goals more than those of any other group, ushering in a firmer shift to the Right and away from Sanders’s vision of a progressive society.  In their enthusiasm, Sanders supporters are threatening to solidify their own and our nation’s chains.

Clinton supporters instead savor the comfort of chains to their at best minimally left-leaning progressivism.  While Clinton, as Secretary of State, did push a number of progressive issues forward (women’s health and emancipation, the freedom of gender identity, the voices of non-governmental advocates for democratization like Aung San Suu Kyi of Burma, etc.), she also wavered on trade deals which threaten to increase globalization and decrease American job growth and economic independence.  There is a dangerous tendency in Clinton and her supporters (and to Sanders as well, even if his supporters fail to see it) to settle for what progress we can sneak past the corporate establishment, while empowering that establishment further with greater wealth and status at our own expense.  Clinton needs to be pushed often and fiercely to remember her liberal credentials (which are just as legitimate as those of Sanders, even if she has connections pushing her in other directions).

Between the Democratic varieties of fools, Clinton supporters need to embrace the more progressive vision of Sanders, cease deriding “Sandernistas” and “socialists,” and remember that socialism is ultimately about empowering workers to fight for their rights – a message that the Democratic Party often at least pretends to espouse.  Sanders supporters need to realize that they are of much the same ilk as are Clinton supporters; and that as such, both candidates’ supporters lose out if Trump is elected in November.

Trump supporters are their own unique type of fool, many (like some Sanders supporters) new to the field of spectator politics.  Trump’s supporters have failed to read Trump’s own statements (conveniently available on his website), which promise both to hurt their political interests and to raise their taxes for the pleasure.  An alleged billionaire who shipped jobs to China, lost fortunes of his inherited wealth, and profiteered off of those losing their homes in the housing market collapse, is nonetheless convincing the uninformed that he is a populist who will fight his business partners and friends on Wall Street, bring back jobs to the US (now that it has become politically correct for him to be interested, and despite not having any actual plans for doing so), and will help them now instead of profiting off of their losses as he has always done in the past.  The people most hurt by Trump’s business practices and lifestyle are the very ones building his movement.  They do not merely revere their chains; they worship the man who made those chains, and shout that he is now going to set them free.  One could almost love them for their optimism and simplicity, were it not for their vehement racism, xenophobia, misogyny, and anti-intellectualism.

A final type of fool likely to play a role in November is the one who will withdraw from the whole process and just avoid voting entirely.  The republican (small “r”) ideal depends on citizens taking responsibility for themselves, for their families, and for their communities, by ensuring that elected officials are responsible to them through the electoral process.  Those who leave the thinking and decision-making to others are the first ones to complain that their schools are “failing,” that the US goes to war at the drop of a hat, that their income is stagnating, that their government is corrupt and unconcerned about their issues.  We expect adults to care for themselves, we expect parents to care for their children, and we expect citizens to care for their cities, states, and nation.  Those who do not vote are largely responsible for the disappointments of all of us, voters and non-voters alike.  These fools have failed to recognize their own responsibility for undoing their chains through the electoral process and through civic action.  They wear the chains of convenience instead of assuming the inconvenience of civic responsibility.

Which type of fool will you be?  This list is clearly not exhaustive, but simply recognizes that all of us ultimately are fools of one sort or another (especially in the eyes of the other fools around us).  Try to recognize that your own brand of foolishness helps you to revere some form of chain or another; and remember that we are all of us fools in chains together.

6 thoughts on “On Fools and Their Chains”