Over the past two weeks, my wife and I celebrated our nation’s 240th birthday by touring New England, with visits to Boston (where we observed the city’s July 4th fireworks show from the Charles River), Salem and its witch museum, and Rhode Island.  In Boston, we also walked the Freedom Trail, seeing Paul Revere’s house and the Old North Church (notice the plaque in the headline image).  We visited a replica tea ship, of the type also visited in the Boston Tea Party, and we stood beneath the balcony at which Bostonians first learned of the Declaration of Independence signed in Philadelphia.

On our way back home to Michigan, we stopped in Gettysburg, Pennsylvania, to tour the battlefield for several days, paying respect to another national birthday that occurred some four score and seven years later.  While our vacation was an immersion into the past, we have resurfaced to link that past to our nation’s present and future. 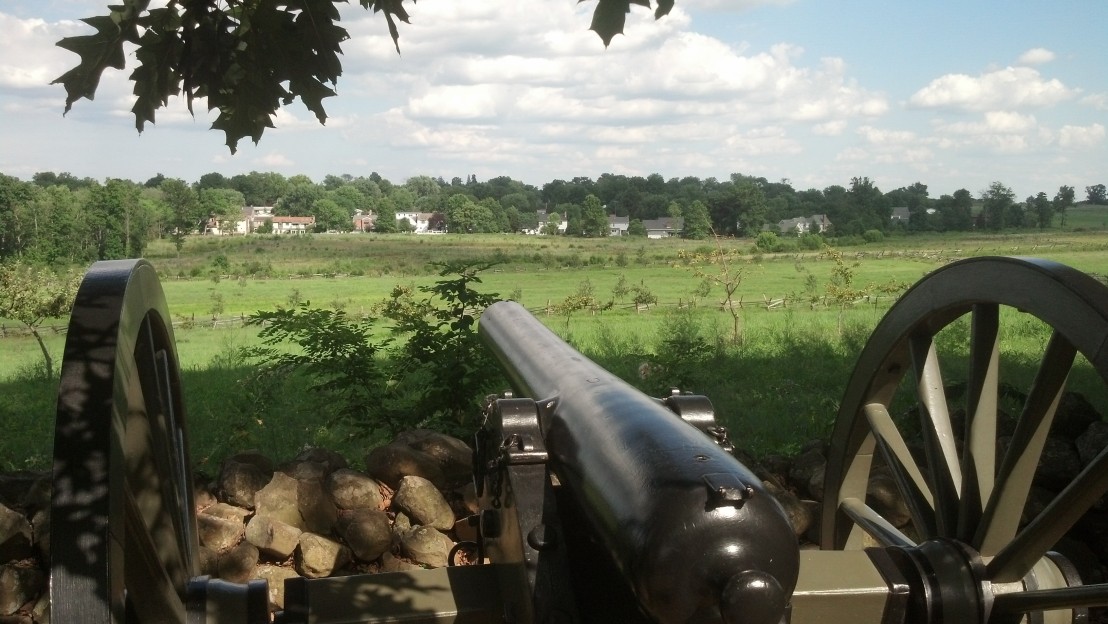 Immersing ourselves especially into two tumultuous events of American history, the Revolution and the Civil War, it was easy to be torn emotionally between the passion and vision of the former, and the bloodshed and controversy of the latter.  With these two events solidly in our minds, we perceived the great promise of America: that all people are created equal, and that we are endowed with certain inalienable rights.  We also perceived that, 87 years after those words were written down, one of our nation’s bloodiest battles was fought between Americans holding two uniquely distinct translations of those words.  While our Gettysburg experience did not touch deeply on the Reconstruction, its failure to change the South, or another revolution a century later whose results even today are contested in our legislatures and courts, we do know that the blood spilled on the soils around Gettysburg, soils walked by our own feet these past two weeks, has yet to be redeemed by a nation struggling still with its racial identity.

These two monumental events, the Revolution and the Civil War, show a nation with both a great promise and a great reluctance to live up to that promise.  Indeed, on and around July 4, there was much flag-waving, much hurrahing, much fanfare over the “greatness” of our nation, but little public forum on the qualities that define that greatness, or the characteristics that argue its veracity.  We Americans love to fly our flag, to put our hand on heart and look optimistically forward.  We love to cite our rich, white, male founding fathers and their utopian vision of something called “equality.”  But blood was spilled over the meaning of those very words, in 1776, and into the 1780s; in the 1850s, 1860s, and 1870s; and in the 1960s.  Blood is still being spilled, between police officers and the communities they “serve and protect,” and at Trump rallies calling for another quality called “greatness.”

Our trip to Salem also illustrated our nation’s capacity for self-fear, self-loathing, and witch hunts (both metaphorical and real).  We love to point fingers, assign blame, to stick our nose in others’ affairs.  Persecution, witch hunts, suspicion, and xenophobia are every bit as much American as our inspirational founding phrases; and they are, to many of us, a great deal more real than are those idealistic words written down by a privileged few.

The witch trials, the Revolution, and the Civil War all show Americans as an emotional people, who at key moments in our history march forward with pitchforks, muskets, cannon, and rifles, and fight out our differences, spilling blood and ending lives rather more effectively than we decide the debates that trigger such bloodshed.  This emotionalism also surrounds other acts, like John Winthrop’s proclamation of our liberal imperative to build the “shining City on a Hill.”  This emotionalism has gathered new forces of hatred and ignorance in today’s politics, shaped by a conservative media machine feeding factually deprived constructions of current and past events to an audience ever more hungry for factless validation.  Even the Left has been tainted by such unnerving and baseless propaganda, with an entire #NeverHillary force built up on unfounded conservative rhetoric fed to new voters unmotivated to investigate affairs for themselves, and hungry for information that requires no personal efforts at vetting, objectivity, or reason.

Now, with America’s failed foreign policies of oil-based imperialism to blame for the construction of new forces of terror, with a populace living in an historically low-crime era but increasingly frightened by the conservative media and the NRA into needing ever more destructive private arsenals, with the police militarizing and displaying an overtly racial application of “community policing,” our nation has become frightened, angry, resentful, suspicious.  While polls indicate that the voters continue to understand the dangers of having too many guns available in a culture unwilling to fund schools and work programs, a divide separates that population from the “representative government” of a Republican Party whose campaigns are funded by the makers of those guns.  Fear, anger, resentment, and suspicion do not mix well with large, military-style arsenals, whether owned privately or by the police.  Our nation’s emotionalism would not carry quite the danger of continued bloodshed if our society were not so dangerously over-armed.

Our nation is now, once again, at a cusp.  We face changes in our party structure just as we did on the eve of the Civil War, in the two major parties that have dominated political issues since that war.  We face a Democratic Party struggling for legitimacy among an ever more restless youth (with ever bleaker economic prospects), and struggling to retain its traditional strength among women and minorities (racial, religious, and identity-based).  We face a Republican Party struggling for relevance as new demographics shift presidential elections away from an increasingly white-men-only party, but which continues to dominate, through gerrymandering and corporate campaign financing, congressional elections.  We face a populace tired of both parties, tired of choices that seem like the “lesser of two evils.”  And at the end of the 2016 primary season, we face a critical choice between two different parties, two very different candidates, and two fundamentally different visions of America.

Notwithstanding the always intriguing prospect of a third party (easily dismissed due to the failure of our smaller parties to build local and state-level constituencies, a historically necessary first step in new party formation before jumping to the presidential run), Americans have a choice between two candidates hated by the other side, and also distrusted by many independents.  But having two flawed candidates is not the same as not having a clear or valid choice.  Candidates are human beings, as much as we try to elevate them to messianic or satanic purity in trying times like today.  Voters can, must, and do accept candidates with flaws in order to find the best of the necessarily imperfect choices for the job.  In 2016 that choice is a clear one.  On the one hand, the Democrats have selected a lawyer who has helped poor and minority families, who has consistently pushed the nation toward a greater commitment to health care, who has helped build partnerships with foreign governments and with fighters for democracy like Burma’s Aung San Suu Kyi.  Clinton’s record is not perfectly consistent (any more than is Senator Sanders’s, or Trump’s); and the conservative propaganda-and-government complex has invested millions of dollars, both public and private, to heap distrust and contempt upon a candidate whom they fear may be able to get results and turn the helm to the left.  On the other hand, America can elevate an inherited billionaire who has never earned the public’s trust, who has never held a public position, elected or appointed, who has failed in venture after venture after venture (only saved from financial ruin by his family’s deep treasure of stored wealth), who has shifted the very jobs of those shouting his name to China and claims now that he will somehow get them back (without bothering to elucidate on the details), who attacks Americans and foreigners alike, who defecates upon our nation’s most treasured values and our long history of depending on immigrants and refugees to build our nation.  We can elect a candidate embraced by the many peoples of our land; or we can wish vainly and with no prospect of success to make America white and patriarchal and frightened and suspicious again.

In the end, however, our choice is not just between two candidates.  Our choice, like those faced in 1776 and 1860 and 1964 and in so many other moments of our history, is between succumbing to fear and hatred, distrust and violence, on the one hand; or embracing the promise of our nation, the liberal imperative toward the City on a Hill, accepting the challenges bravely and together, as a nation of many peoples.  We the People can form a more perfect Union; or we can succumb to our fears, breaking ourselves morally, economically, and politically in trying to replicate a Roman Empire by propping up a corroding and bankrupt Pax Americana.

2 thoughts on “A Vacation, a Reflection, and a Choice”