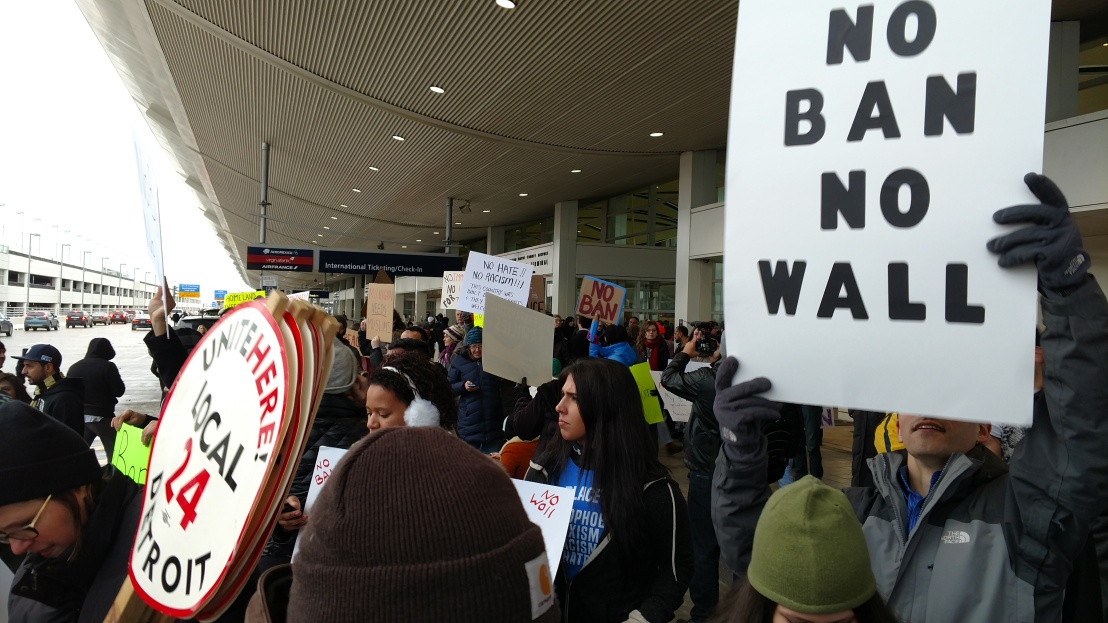 Yesterday, Women’s March On Washington – Michigan participated in a mass protest with other groups, at the Detroit Metropolitan Wayne County Airport (DTW), against the recent Trump executive order banning Muslim entry into the US from Muslim nations which do not have Trump businesses operating there.  Having worked with WMW on the march on DC on January 21, 2017, the day after inauguration day, I have been following WMW’s chapter in Michigan and joined in the protest under their Facebook page for the protest. Many other groups not affiliated with WMW, in particular local Muslim groups and local resistance organs like MoveOn, Democracy For America, unions, etc., also participated.  By some estimates, participation was roughly 5,000, at the McNamara Terminal.  Protesters held positions on both the terminal’s upper (Departures) level, and on the lower (Arrivals) level.  Those pictures, video, and verbal descriptions of the lower level that I have encountered indicate that the majority of the protest was there.  Originally, WMW told its participants to go to Departures on the upper level, so that is where my party went.

The day before the protest, when the ban was announced, WMWM posted the protest almost immediately, and in no time at all a couple thousand people indicated interest or intent in going.  I used my personal contacts from the Hillary Clinton campaign, and my network of personal friends and family, to form a team of about 12 people to join the protest; and numerous other campaign staff and other associates also went.  Unlike my group, most of those who I know that went, and who did not come with me, went to the lower level protest.

On the day of the protest, my wife and I hosted a preparation party to make signs and to fortify ourselves for the Michigan cold with some of my wife’s awesome cupcakes, veggies, and snacks.  I met some great new friends who wanted to get more involved in the resistance, and who came with some of my other friends.  After making signs, we divided our group into two car-loads, and off we went. 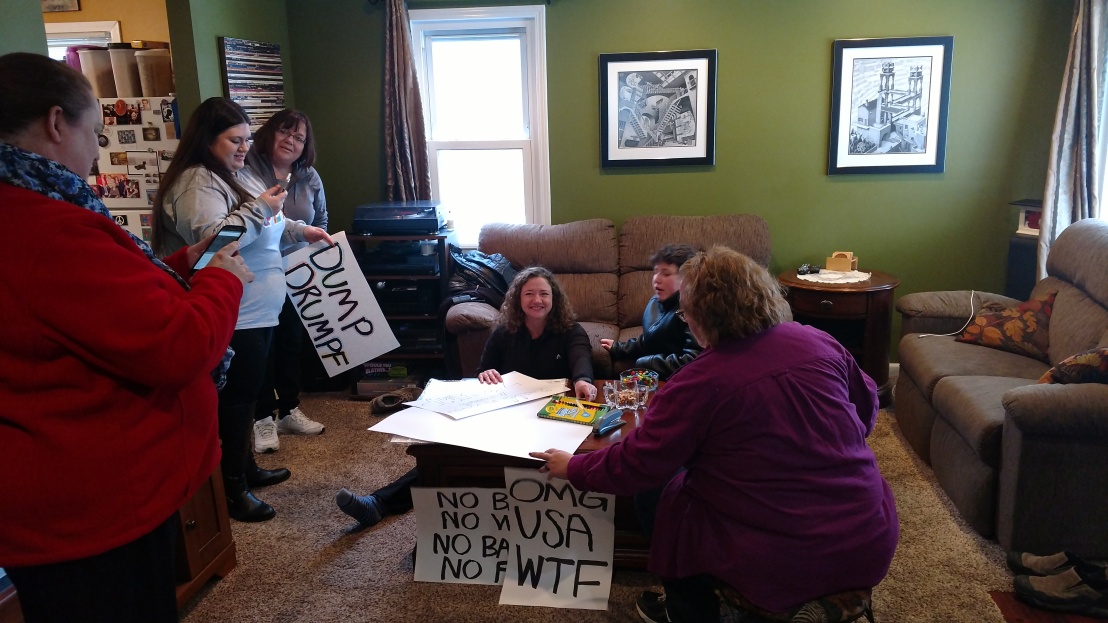 Then, we hustled off to the airport, only a few minutes away in normal traffic from my house.  Quickly, we found ourselves in a massive parking lot on the roads heading in, as so many other people were all heading to the airport to join the protest at the same time.  We could see signs in lots of the cars around us, WMW “pussy hats,” and other paraphernalia indicating that most of the jam was protesters, not people trying to catch a flight.  The normally 10-minutes’ drive to the airport from my house took roughly an hour; and about a mile from the terminal, people were walking past us on the sidewalk, some towing luggage, some carrying protest signs.  We did at least have lots of time to wave and exchange thumbs up with other cars of protesters, and to enjoy the many signs that we all just started hanging out of our cars or putting in the window.

Once we got to the airport, the police were having a hell of a time keeping things from inhibiting airport operations, so we had to get out of the truck quickly while police were yelling for us to keep going.  Our two vehicles got divided, and our twelve people found different spots in which to protest. My carload (after my wife dropped us off to circle around and find parking) joined a long line of newly arriving protesters, all of whom got cheered and “high-fived” by those already there, as we walked past a fence acting as the outer perimeter of the protest area.  Sadly, my wife never was able to make it in; she found some other protesters who needed a ride back out, and helped them out; and then tried to circle back in.  By the time she made it to the parking lot, it was more than another hour later; and the police were no longer letting people park – they were trying to break things up, as the permit for the protest had expired (we had a two-hour protest permit).  She circled back one more time, and picked us up about an hour or so after the protest was supposed to have ended, although the protesters were still there in force.  My party, both cars, found their way out (much easier at least than coming in), and went back to my house to share pizza, stories of the resistance, and friendship.

Some of my pictures from the upper-level protest: